Double Dragon 3: The Rosetta Stone (ダブルドラゴン3 ザ・ロゼッタストーン Daburu Doragon 3: Za Rozetta Sutōn) is a side-scrolling beat 'em up produced by Technōs Japan that was originally released as a coin-operated arcade game in 1990. It is the second sequel to Double Dragon for the arcades, following Double Dragon II: The Revenge. A Nintendo Entertainment System game loosely based on the arcade version was released, along with conversions for the Sega Mega Drive/Genesis, Game Boy, and various computer platforms. 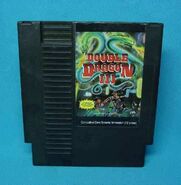 ID: M21-02
Add a photo to this gallery
Retrieved from "https://piratedgamemuseum.fandom.com/wiki/Double_Dragon_III:_The_Sacred_Stones?oldid=11536"
Community content is available under CC-BY-SA unless otherwise noted.