Last Action Hero is a series of action video games based on the film of the same name. Versions were released for various systems; including the NES, Super NES, Sega Genesis, Game Boy and Sega Game Gear. A Sega Master System version was also developed, but never released.

All versions of the game faced an even poorer reception than the film, receiving mostly negative reviews due to its poor graphics, limited set of moves and repetitive gameplay. A separate version was released on the Commodore Amiga and was developed by Psygnosis. Only the MS-DOS version offers cut scenes from the actual motion picture. 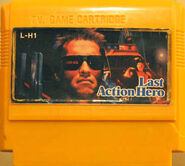 Add a photo to this gallery
Retrieved from "https://piratedgamemuseum.fandom.com/wiki/Last_Action_Hero?oldid=11461"
Community content is available under CC-BY-SA unless otherwise noted.