Somari is a pirate original developed by Hummer Team and published by Ge De Industry in 1994. This game was one of the most known pirate originals due to being a Sonic game on the NES with Sonic replaced with Mario.

This game has been hacked numerous times. All the known hacks are:

An original copy of the game, complete with box

Back of the game's box

Another copy cartridge, this one titled "Somari 2" in Chinese

A possible(unconfirmed) clone of the game, label reading Sonic Brother.

ID: KT-2193. Unconfirmed but assumed to be Somari. 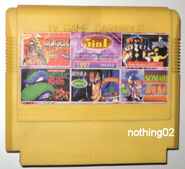 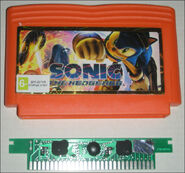 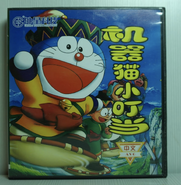 Boxed copy of Doraemon
Add a photo to this gallery
Retrieved from "https://piratedgamemuseum.fandom.com/wiki/Somari?oldid=11272"
Community content is available under CC-BY-SA unless otherwise noted.