Super Contra (スーパー魂斗羅 エイリアンの逆襲, Sūpā Kontora: Eirian no Gyakushū?, "Super Contra: The Alien Strikes Back") is a Run and Gun-style action game produced by Konami, originally released as a coin-operated arcade game in 1988. It was released on the NES as Super C to avoid any references to the Iran-Contra scandal, while in Europe was named as Probotector II: Return of the Evil Forces, which was also a sprite edit where the human characters were replaced by robots. 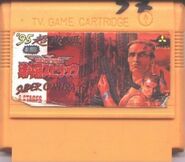