Super Mario Bros.: The Lost Levels, known as Super Mario Bros. 2 (スーパーマリオブラザーズ2, Sūpā Mario Burazāzu Tsū?) in Japan, is a platforming video game developed and published by Nintendo for the Family Computer Disk System. First released in Japan on June 3, 1986, it is the direct sequel to the second best-selling video game of all time, Super Mario Bros.[4] Due to the game's high difficulty and similarity to its predecessor, Nintendo of America chose not to release it in the United States until the Nintendo Virtual Console release in 2007,also for 3DS.[5][6] Bootleg cartridge copies of this game are still sold today through websites like AliExpress.[1] 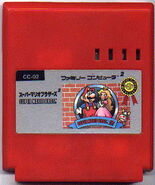 Add a photo to this gallery

Cite error: <ref> tags exist, but no <references/> tag was found
Retrieved from "https://piratedgamemuseum.fandom.com/wiki/Super_Mario_Bros.:_The_Lost_Levels?oldid=11431"
Community content is available under CC-BY-SA unless otherwise noted.